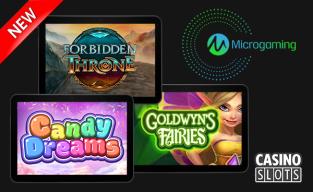 Microgaming has released four new games to their Quickfire platform this month, showing that May 2017 has been a big deal for this platform as a whole. The first new title is Fortune Girl. It uses five reels with three rows and 15 paylines, and it uses a manga style of visuals, which is something you don't see much of. Massive random symbols give you chances for picking up wins on several paylines in this slot.

Next up is Forbidden Throne, a slot with 40 fixed paylines. This is all about the interplay between two guardian figures, Sorconass the Queen of Ice and Wulthor the Elven Lord of Fire. What's significant about this title is that you will always get a stacked wild on every single spin during the regular game. You can even get all five reels filled with wild symbols. Chances for up to 30 free spins will also keep you on your toes in this slot.

Candy Dreams is a game with a format that's a bit different since there are 720 ways to win, and the reels themselves can switch around. You'll find that there are two different scatters that connect you to two different features, and that means up to 12 free spins in addition to the Candy Planet bonus. There are some very serious wins available in this game, and it has a higher volatility than the other two.

Goldwyn's Fairies Slot by Just For The Win

Just For The Win is a newer software company that has just released its first title on May 17, 2017. The name of this game is Goldwyn's Fairies, and it's available through the Microgaming Quickfire platform. You can get a re-spin feature by lining up Goldwyn on the middle reel for extra wilds and re-spins as long as Goldwyn keeps showing up somewhere on the reels. There's also an opportunity to get up to 10 free spins with wilds that pile up during the feature to give you a serious chance at major wins on the 10th free turn. This game has a lot to offer, and these four as a whole represent a nice addition to Microgaming's lineup.

Press Release, Four Fantastic Game Additions From Microgaming in May microgaming.co.uk, May 15, 2017