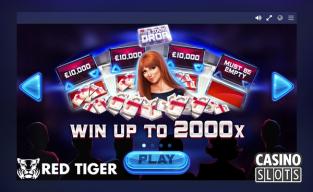 The £100K Drop is a new slot from Red Tiger Gaming that's being launched in conjunction with a daytime TV game show that starts broadcasting on May 7th.

Red Tiger Gaming has partnered with Endemol Shine Gaming to bring this slot game to market. Endemol Shine is the production compANy behind hit TV shows and games such as Big Brother, The Million Pound Drop and The Money Drop among others, and has exclusive rights to some of the most successful shows of recent years.

The £100K Drop game show will be presented by Davina McCall, and is a daytime version of the Million Pound Drop which she also hosted. The slot game will be launched at a number of Red Tiger Gaming partner sites, including William Hill, Paddy Power and Rank group casinos, where the combination of a popular game show tie-in and a bonus round that's triggered by 3 £100K Drop scatter symbols should ensure it's a big hit.

As part of the same arrangement, a Deal or No Deal Blackjack game, where players can cash out their hand when the Banker offers them a deal, is also being launched by Red Tiger Gaming.

Red Tiger has built a great reputation as one of the most innovative providers of slot games, and partnering with them to launch The £100k Drop game was a natural decision. We anticipate a long and fruitful partnership with this fast-growing games comp

Launched in 2014, Isle of Man based Red Tiger Gaming is operated by an experienced team and has quickly grown to over 200 developers, designers, mathematicians and gambling experts. Their HTML5 slots and table games come with a variety of innovative features, such as progressive jackpots and the Smart Spins bonus management system.

Deal Or No Deal