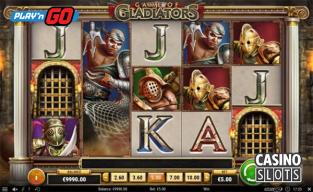 Play'n GO has just announced the details of their latest slot machine. Game of Gladiators is due to launch at online and mobile casinos on 6th June 2019. The impressive graphics bring the action of the Coliseum to life, while the special bonus rounds, such as unlimited free games, will help to bring rewards to players who trigger the features.

Game of Gladiators plays out over 5 reels and 20 paylines. The high-end graphics and animations include images of 4 brave gladiators alongside the playing card icons. Character symbols become animated when they become part of a winning combination, helped by a tiger, who is wild and can acts as others if needed.The reels are surrounded by classic Roman columns, decorated with golden loin heads.

The torch-lit gates to the arena floor will trigger an Enter the Arena round. Players choose their champion from the characters of Amazonia and Spartacus, with their chosen hero becoming an extra high-paying scatter symbol throughout the round.

Free spins will begin and these carry on as a series of battles occur. A battle begins with each appearance of a scatter symbol and the champion will need to vanquish other gladiators for big prizes. Once all gladiators have been defeated, or all battles lost, the free games come to an end. Amazonia can then award a prize between 20x and 200x the stake, while Spartacus can retrigger the feature.

On top of this thrilling feature, Game of Gladiators players can also find a number of randomly-triggered bonuses. The Enraged feature sees the wild tiger extend across 2 reels, while the Net Attack triggers a respin. Up to 6 wilds can be added ot the reels in the Spear Attack and the Sword Attack duplicates 2 or 4 reels for some huge winning potential.

This high volatility slot machine can be played on desktop and mobile platforms from 6th June. It has a default RTP of 96.24%.