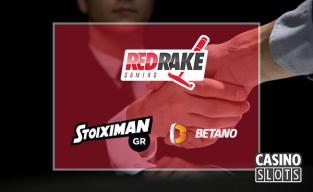 Red Raking Gaming has announced new partnership deals that will extend their presence in a number of regulated markets. Recently-signed agreements with Stoiximan and Betano will see Red Rake Gaming portfolio supplied through these major operators in Greece, Romania, and Portugal.

Popular games such as Mystic Mirror and the newly-launched Bonnie & Clyde are included in the deals. Stoiximan and Betano casinos have been adding new content from a number of premium suppliers. The inclusion of the Red Rake Gaming range will further strengthen their positions within these regulated markets, where they are already among the top providers.

Red Rake Gaming provides innovative slots and casino games across multiple markets, such as the UK, Belgium, Italy, and Spain. Some of their top titles include Tiger & Dragon, which offers up to 1 million ways to win, and Wildcano, which breaks with traditional slot mechanics. Each Red Rake Gaming title has unique maths behind the gameplay, along with top-notch graphics and the option to play on desktop PCs or mobiles.

About Stoiximan and Betano

Stoiximan is an established brand in Greece and Cyprus. Under their international brand, Betano, they have a presence in Romania, Austria, Germany and soon, Portugal. With over 500 employees and major sponsorship deals with sporting giants such as PAOK and VfB Stuttgart, this is a big company that keeps on growing.