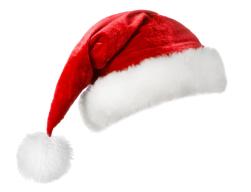 The holidays are a popular time for online casino software companies to release new games. With Halloween, Thanksgiving, Christmas, New Years and Valentine's Day all coming within just a few months of each other, you can bet that you'll see a ton of new releases based on these days. NuWorks has added the most recent to the list with their new Santa 7s classic slot. This game has a great holiday theme and adds to the recent trend of new classic slots being released that we've seen from other software providers.

It's worth pointing out that NuWorks has never released a Christmas-themed game before, so this is an important addition to their growing portfolio of games. Santa 7s uses three reels with three rows, and it has five paylines. You can choose to play on fewer, but it's better for your payout rate if you keep them all activated. Coins range from $0.10 to $1 apiece, so your betting range is $0.50 to $5 per spin with all paylines turned on. While this isn't going to appeal to super high rollers, the vast majority of players will be satisfied with the available selection of bet sizes.

You'll see Santa Claus, candy cane lucky sevens and several Christmas ornaments on the reels. A variety of features are available including free spins and instant wins as well. The low-end symbols in this game consist of balls for a Christmas tree that hold hearts, diamonds, clubs and spade symbols, and this is the type of theme for low-end symbols that we've seen before in recent releases. In Santa 7s, you'll get a chance to play at various speeds, and you can autoplay as well, so you have a lot of room to customize your experience.

It's seemed like there have been more classic slots released recently than have been done around the same time ever before. This is really interesting because it's a genre that was largely thought to be forgotten, but players are enjoying the games, and this creates a situation where the software providers feel like they have a demand to fill. It's really cool to see an older style of slot being resurrected and handled through the lens of modern trends in slots, and we're seeing some very feature-rich titles being released in the meantime.

If you want a shot at Santa 7s, then we suggest you try Buzzluck Casino.