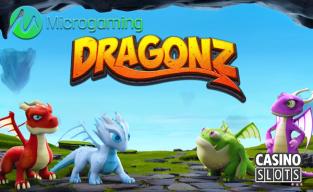 Microgaming has had a pretty good series of games come out recently, and they're adding to that with the Dragonz video slot. The premise of this title is that there are four different dragons, each of which is quite small, but together, they can give you the opportunities to score some major wins. This game uses 3D graphics and a variety of different features to give players a solid overall experience.

The main feature in this game is a set of four different free spin bonus rounds. They are set up to be based on the four dragons in the game. Flint is one of them, and he gives players Flaming Wilds on each spin. His counterpart is Frost, which set up frozen wilds (ie: sticky wilds) that give you a chance to win on future spins. Gobble gives players extra wilds, and Switch gives players Stashed Wilds, which is an innovative feature that allows players to collect wilds and then cash them in on a future spin.

These features trigger randomly when the player first gets in on the action. However, after it has been triggered 12 times total (not just in the same session), players can then decide which of the free spin features he or she wants to play without it being subject to random chance. That's not the only feature, however, with the Wild Deal option giving players extra wilds on the reels whenever you get one on the center reel that doesn't turn into a win.

A lot of people have been writing Microgaming off in the last half of 2016. They didn't necessarily have the super aggressive start that some people were expecting in the first couple of quarters for this year, and a lot of that is simply down to the fact that they have been so consistent with new releases and expanding the reach of their Quickfire platform that it seems like the norm for them at this point. Along those lines, it doesn't seem like they're doing anything special when they average several new releases each month for the entire year, and that's mostly a perception issue than an accurate assessment of reality considering how well they are doing as they close out the calendar year.