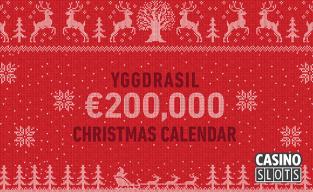 Yggdrasil Gaming has innovated on a number of fronts, and not just in the gameplay values of their high-quality online slots. Instead, they have also innovated on the backend, and their BOOST and BRAG platforms for in-game promotions are a good example of that. They're taking advantage of these tools during the holiday season to put on their EUR 200,000 Christmas Calendar promotion, and it's going to be a big deal for the players.

How This Promotion Works

For players on most sites that use Yggdrasil Gaming's games, you'll be able to log in and play select titles like Golden Fish Tank and Vikings Go Wild like you normally would. However, these games and your performance in them will be tied to special promotions for the Christmas Calendar event. One of these is a Cash Race, and it allows you to win cash prizes over a pre-set period of time based on your play in certain titles. They will also be using their Missions setup to give players an opportunity to meet certain accomplishments in their games to win prizes.

The Competitive Nature of the Industry

This is a very competitive industry, and for a software company or online casino to see succes, they really have to bring it when it comes to game quality, game selection and promotions. What we're seeing here is a software company really push things on the promotional side of things, which is something we haven't really seen much of in the past. Yggdrasil has been pushing on this end of the promotional equation as a tool to compete with other software developers, and with events like the Christmas Calendar promotion, it's obvious that it's working.

In October of this year, players had a different promotion from Yggdrasil based on completing tasks in their Missions system as well. They had to go to Golden Fish Tank and complete four consecutive winning spins to win here, and they had to pick up free spins in Vikings Go Wild. They could also collect five shards in Holmes and the Stolen Stones game. These are the types of missions we might see in their Christmas Calendar promotion as well.