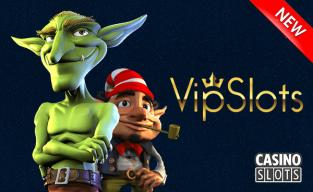 A new online casino site has opened its doors, and it goes by the name of VIP Slots. As you can tell by this name, the focus of the site is on slots, and it puts players in a position to have tons of games all in one place from several of the top providers in the entire industry. They are also focusing on players from Australia, but they accept fans from just about everywhere but the United States, Canada and France.

The game selection for this new site is really where the focus is going to be because they have a great platform with lots of providers contributing content. The Microgaming Quickfire platform is used here with games from names like Quickspin, Endorphina, IGT and plenty of others. They also have titles from Rival Gaming, BetSoft, Arrow's Edge, Pairplay and Spinomenal. This all comes together to give players several hundred different titles to pick and choose from, making it a paradise for slot players especially.

Something really interesting that we're seeing from this new casino is that they allow players to sign up using the Facebook Connect feature. This makes it very easy and convenient to sign up, and it also puts you in a position to talk to other people and take advantage of a variety of social features that you wouldn't normally see available in online casinos. All of this is optional, of course, and you don't have to sign up using your Facebook account if that's not something you're comfortable with.

Right now, it's looking like they have some decent bonuses available, so there's more to look forward to besides the game selection. The number of operators that have titles here is nothing to ignore, however, because it's a fairly impressive selection. Overall, it's looking like there's plenty to be excited about with this new casino, and VIP Slots has the potential coming right out of the gate to be a strong name in the industry overall once they build up a reputation and get a history behind them of taking care of their players.