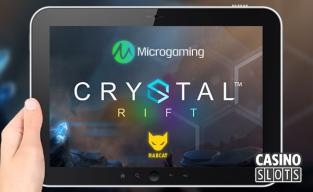 Microgaming and Rabcat have collaborated to release Crystal Rift, a new slot machine where colourful gems appear in a dark cavern. The symbols are seen over 5 reels and 25 paylines corss them.

A Jewel of a Game

The game features Bonus Falls, where symbols that are part of a win will vanish and new ones drop into the spaces from above. If new wins appear, another Bonus Fall occurs until no more winning combinations are landed. 20 different grid patterns afre seen acorss the game, with the Basic, Super, Mega and Insane levels each providing their own exciting gameplay.

A Wild Grid feature turns all symbols on a grid into wilds each time players land 3 consecutive wins. This game is launched on 21st November at the many online and mobile optimised casinos that feature the Microgaming range.

With its unique Wild Grid feature, which adds mystery to every spin, complemented by Bonus Falls, Rabcat has created a thrilling gaming experience, presented in a sleek, modern style.