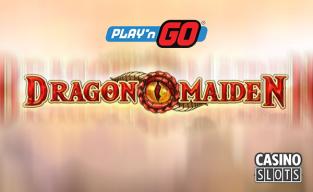 Play'n GO have announced their newest slot game which will take players on a mythical adventure across 5 reels that have 243 Ways to Win across them. Dragon Maiden is set for release on November 15th.

The stunning animations feature Geneth, the Maiden who controls a huge dragon. She is the wild symbol who can expand across entire reels, while the dragon is a scatter icon that unlocks a free spins round. The colourful symbols also include playing card suits, coins, jewels and a dagger. Up to 5,000x the total bet can be won when the ideal combinations of symbols land across the game.

The special free spins feature sees one reel expand from 3 to 6 symbols high. Golden free spins can be awarded during the feature, which give players a massive 7,776 different ways to form winning combinations. Animated dragons will engulf the reels in flames, adding a new level of action to the bonus rounds.

Dragon Maiden can be played on desktop PC's and mobile devices from just 0.20 per spin and comes with a default return to player percentage of 96.49%

Players can unleash the dragon at Play'n GO casinos later on this month.