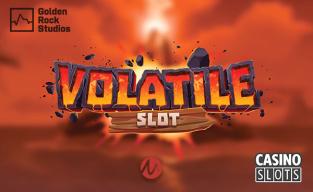 Volatile Slot is the first result of a collaboration between Microgaming and Golden Rock Studios. Played out over 5 reels and 10 paylines, Volatile Slot features high-speed action, where different game modes and free spins add to the excitement.

As the name suggests, it's a high volatility slot, but it comes with generous overall returns of 96.1%. The game is set against the backdrop of a volcanic island, somewhere in the Pacific Ocean.

Playing card symbols, a fire, Polynesian girl and hut make up the standard symbols. Players should keep watch for the volcano, as this is a wild symbol that acts as others to complete win-lines. The volcano wilds can erupt at random, awarding win multipliers of 2x, 3x, or 4x.

If more than one exploding multiplier appears in a combination, the values are combined and players could see wins boosted by up to 64x over the base rate.

Three wilds in view will launch an explosive free games round. 10 spins play out and the reels will be enhanced with extra wilds and multipliers throughout the round.

Golden Rock Studios was founded by James Curwen and Will Mathisen. They have around 35 new and upcoming games in the pipeline and will distribute their content exclusively through the Microgaming platform.

“We are proud to team up with Microgaming and look forward to providing them with many more exclusive games in the coming months. Our first release, Volatile Slot, delivers an exhilarating, high-volatility gameplay experience.''