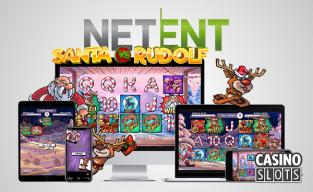 All is not well at the North Pole, as Rudolf the Red Nose Reindeer has stolen Santas hat. The result is the Santa vs Rudolf slot machine from NetEnt, which covers the tussle between them as Father Christmas tries to retrieve his hat from the naughty reindeer.

This 5-reel, 20-line game is packed with extra gifts, such as free games, walking wilds, and reel respins.

High Drama At The North Pole

Santa vs Rudolf is a cartoon style game, packed with humourous touches. Symbols include sleigh bells, candy canes, and reindeer. Santa stands to one side of the reels, scratching his bald head as he looks for his hat. Rudolf is on the other side of the game, wearing the missing hat and sticking his tongue out at his boss.

Both characters are wild symbols, able to act as others if they can complete winning combinations. Santa vs Rudolf is packed full of festive gifts. Players will see walking wild symbols that move around the game, along with 2 bonus rounds. The Santa's Gifts feature is a prize-picking game, where players click on presents to reveal big prizes.

In the Rodolf spins round, players will see the cheeky reindeer all over the reels, helping them to claim some big wins throughout the round.

Santa vs Rudolf comes from NetEnt. It has average returns of 96.35%, so players could pick up some early Christmas gifts when they play this game on desktops PCs or mobiles. A medium to high volatility adds to the excitement of Santas' quest to retrieve his hat.

Players can spin the reels of the Santa vs Rudolf online slot for stakes of between 0.20 and 100.00 per spin. It's now available to play at sites which carry the NetEnt range

Santa vs. Rudolf continues the humorous trend with goofy antics from our two favorite holiday heroes battling it out for seasonal supremacy. This narrative will be hard to resist even amongst the scrooges in our player base! Happy Holidays!”