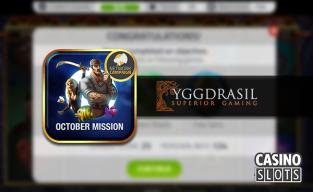 In the online casino world, one of the main things that keeps players interested and gives them value is promotions. There are plenty of different types of promotional tools out there for online casinos to give players different ways to get paid, but Yggdrasil Gaming has taken things to a whole new level. With their new Missions feature, players will have even more reasons to play different games to achieve as much as they can.

How the Missions Feature Works

The first thing to know is that Yggdrasil offers up something called their BOOST platform, which is a set of tools used for offering players promotions inside of actual games that they are playing. BOOST is the foundation that the Missions feature is based on, and it works by giving players different "achievement" style missions to hit during different games. For example, there is a special October mission to kick things off that gives you a prize if you hit four straight winning spins in a row on the Golden Fish Tank slot. Additionally, five of any shard will complete a mission in Holmes and the Stolen Stones.

This is a network-wide campaign, and it's kicking off the Missions system with missions on three games. The third is Vikings Go Wild where players can pick up free spins to finish the mission. They're pretty simple things to do overall, and it mostly comes down to giving players extra value for things they would have done anyway. However, because these missions are spread across different games, it gives players an added incentive to try out different titles.

For the month of October, players have access to the three missions that have been listed above. There is a total of €25,000 being given away to the players that complete these missions, and that's a pretty significant chunk of change to give away to players. While it's obvious that the point of these promotional tools is to keep players at the games longer, the fact of the matter is that it also increases the playing experience for the players as a whole, which is something that Yggdrasil has done quite a bit by focusing on the quality of their games already.