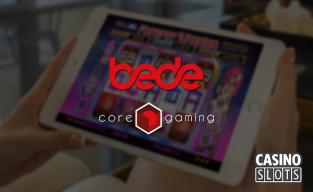 With the way the current state of the online casino industry works, we see all the time that one company will make a deal with another to host their games on a software platform. We've seen it yet again with a new deal between Bede Gaming and CORE Gaming that will see the latter's games hosted on the former's PLAY platform, which adds a bit of depth to their overall offering.

The games that are being added to the PLAY platform are all powered by HTML5. This has a number of advantages. First and foremost, it makes integrating the games into the new platform extremely easy, and that means players will have access to them sooner rather than later. Additionally, it means that these games can be used on a wide range of different types of devices, both computers and mobile, and that puts players in the driver's seat when it comes to picking and choosing how they want to play.

CORE Gaming's portfolio is full of high-quality games, and they're a great addition to the PLAY lineup. This shows that they are getting more and more recognition for the great work they've been doing on the game production side of things, and it'll help them to get their games in front of more players than ever before. These types of deals have been the key to growth for this company, and it goes without saying that their high-end slot selection helps quite a bit as well. They're doing an excellent job with producing quality games and getting them in front of players, and this just shows what industry experts already knew about them.

With the conclusion of this deal, Bede Gaming's PLAY platform now has more than 2,000 titles total for players to choose from. That's a tremendous number of high-quality games to pick from, and it goes to show that they are very serious about offering one of the best selection of games that you can get anywhere. They've broken a major milestone with this deal by breaking 2,000 games, and we're eager to see how long it takes them to get to 3,000.