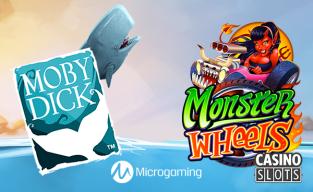 October is a good time for online slot releases because it marks the official beginning of the holiday season. With Halloween coming up at the end of the month and then the rest of the holidays through the end of the year, it's a good time to prime players with new titles that catch their attention. Microgaming has followed this strategy for several years, and two new games have been announced as part of the 2017 edition of this approach.

Monster Wheels is a game based on hot rod cars with a horror theme, and you'll see a number of characters that you probably recognize. The graphics are solid in this game, but they're slanted in a way to show that they aren't taking themselves too seriously. A big part of this title is being able to choose if you want to play for 128 ways or 288 ways to win on each spin, and that comes from two different layouts. You can pick from either, but they both have the same features and same bet size options. This game features different free spins bonus round with multipliers that go up to an incredible 8x.

Moby Dick will be available on the Microgaming Quickfire platform, but it was actually produced by Rabcat, one of their most popular content partners for their platform. This game has been anticipated for quite some time, and it uses 25 fixed paylines across the usual 5x3 grid of symbols. You'll have an opportunity to freeze reels to get bonus re-spins where all of your winning symbols are held in place to give you extra chances to extend your payouts for larger wins. On top of that, players can get as many as 20 free spins to help Captain Ahab go after the whale.

Expect a number of big releases from Microgaming over the next couple of months as they look to catch the attention of the influx of players that always comes with this time of year. This is the busy season for shopping and visiting friends and family, but it's also the busy season for great online slots.