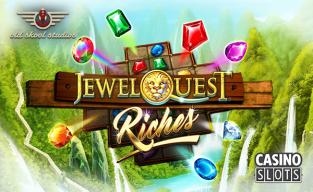 Jewel Quest is a game franchise that has gotten a ton of attention over several years. There have been dozens of different versions and iterations of it, but the core concept remains the same. It's a gem-matching game with a lot of extra aspects added to the experience that allow you to advance through levels and meet certain achievements. Old Skool Studios has made their Jewel Quest Riches slot fall perfectly in line with the look and feel of the other games in the series, and it's now being added to the Microgaming Quickfire lineup.

The Jewel Quest Riches slot by Old Skool Studios is particularly immersive, and that's one of the most important things that it could have carried over from the series itself. You'll be playing on five rows and five columns of symbols with chances to get cascading wins by matching up three or more jewels in a row. These cascading wins offer multipliers that go as high as 12x, and that means you can end up with some pretty huge payouts if you get a few of them on the same round.

Players will get a chance to play an actual Jewel Quest game in the bonus feature with quite a bit of skill involved. You'll try to play through eight different worlds (that are re-playable as well) with chances to get achievements of up to three stars. Each of them also has a progressive jackpot with a chance to win up to 12 moves at a time on these puzzles. It's given even more value with a mystery multiplier in another mini-game, giving players even more ways to get paid.

This game has been included in the Microgaming Quickfire platform recently. Old Skool Studios is a software partner for this platform, and all of their online slots are made available through it as well. This web-based interface (with mobile options as well) gives players an opportunity to play titles from dozens of top-tier software developers in the industry as a whole. This means that companies like Old Skool Studios do not have to have tons of games to get a lot of attention from players, which in turn puts a focus on quality instead of quantity.