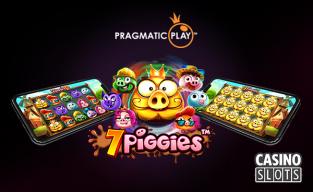 Pragmatic Play has had a pretty aggressive release schedule in 2017, and they've come out with yet another new game to add to the mix. This time it comes in the form of 7 Piggies, a game based on a set of goofy cartoon pigs that want to give you a chance to pull down some serious winnings.

The layout of this game is something that needs some attention because it's a bit different than what you'll find virtually anywhere. There are seven paylines across five reels and three rows of action, and everything is set up to have a pretty high level of volatility, which is also unusual for a title with so few paylines.

You'll also find that there's a free spins bonus feature in this game that's based on the barn scatter symbol. Three or more scatters gives you up to 10 free spins with a multiplier that goes as high as 5x, and it's obvious that can lead to some pretty serious payouts and prizes considering how large of a multiplier that is.

One of the criticisms of Pragmatic Play's slots in the past has been that the visuals are on the lower end of what's acceptable in the industry. They've dealt with these criticisms in a major way this year, and the 7 Piggies slot handles it as well by giving players a very strong graphical approach that looks good and that really sets the tone for the overall experience. This is the type of thing that has helped to push them further up the hierarchy of software providers in the online casino industry.

There are still a couple of months left in the year, and we won't be surprised if they come out with some more games in the meantime. However, they've already had a very good 2017, and 7 Piggies shows that they aren't done yet. With their aggressive approach to their releases this year and the quality of the games they have been putting out, Pragmatic Play has shown that they are a serious force in the online casino world.