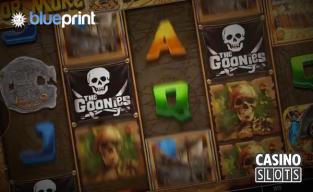 The Goonies has become a cult film since it was released in 1985 and it's now been turned into an online slot machine by the Blueprint Gaming developer. Players join the gang as they follow an old Spanish treasure map, seeking One-Eyed Willy's hidden fortune.

Symbols are inspired by the movie and include maps, the lost ship, skull and crossbones and the skeletons of pirates. The five reels are surrounded by gold coins, hinting at the treasure waiting to be found.

Big rewards can come from special features, such as Chunk's Truffle Shuffle, Super Sloths free spins and Mikey's Hidden Treasure. A skeleton key opens up the bonus games, while The Goonies also treats players to One-Eyed Willy's Treasure Bonus. This is accessed through any other feature, but only for those who manage to beat The Fratellis to the hidden riches.

Playable from just 0.10 per spin, it's been developed in partnership with Warner Bros. Consumer Products to deliver an experience as exciting as the original adventure movie.

Hey you guys! The Goonies is one of the most iconic films of the 1980’s and we’re sure that our latest licensed slot will take players on an incredible adventure as they join their favourite characters on the journey of a lifetime!

Jo Purvis, Director of Marketing and Relationships at Blueprint Gaming