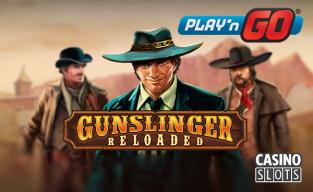 Play'n GO have released details of their latest slot machine. Gunslinger: Reloaded is an exciting Wild West themed game where players can be quick on the draw with free games, a Bounty Hunt bonus round and a jackpot feature.

Gunslinger: Reloaded plays out over 5 reels, with 25 paylines running left to right across them. The Western theme extends to the symbols of playing cards, bags of gold, crossed guns and Western belles that make up the symbols. A grizzled sheriff is the wild symbol and his white horse the scatter symbol that pays multiples of the total bet when it gallops onto 3 or more places at once.

A whiskey bottle starts the Bottle Spins free games bonus feature, with all prizes doubled in the round. Wanted posters in any 3 places will see the Bounty Hunt mode activated. Players chase bad guys through the streets to claim rewards, but the higher the prizes are, the bigger the risks get.

Gunslinger: Reloaded has a jackpot round that starts once wins on each of the playing card symbols have been seen, or if a payline is filled with the wild symbol.

Playable on desktop computers and mobile devices from just 0.25 per spin, this slot rewards players with winnings that are right on target at online casinos which feature the Play'n GO range.