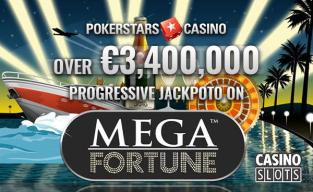 A German player at PokerStars Casino has just won a massive €3,469,139.45 progressive jackpot prize on the famous Mega Fortune slot from NetEnt. It's the eighth time in 2018 that Mega Fortune has paid out a win of over €1,000.000 and the lucky punter was playing for stakes of just €2 when he claimed his life-changing win.

This massive win has become the biggest ever claimed at PokerStars Casino. The un-named winner from Lower Saxony was playing late one night while he waited for a pizza to cook when the jackpot wheels aligned for him and he won his prize. He and his wife were initially numb and disbelieving for a few minutes, but now plan to buy an SUV, renovate the house and help their kids with university fees.

This win will help to cement the legendary status of Mega Fortune, which has paid out some of the top progressive jackpots in history.

This time it has paid out the biggest cash prize in Stars’ history, with the jackpot swelling the number of Mega Fortune millionaires to eight in 2018