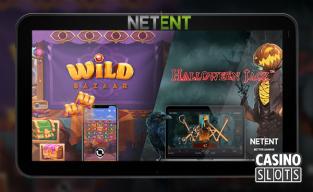 Multi-channel games developer NetEnt has announced the launch of two new slots. Released just before 31st October, Halloween Jack is a spooky slot game that tells the story of a posessed jewellery box, while Wild Bazaar is a Middle-Eastern themed game that uses well-proven math models to provide wins and excitement.

Scare Up Wins With Halloween Jack

Five reels and 20 paylines of creepy action are found in Halloween Jack. This game comes with some frighteningly good features that scare up rewards when walking wilds, hell hound stacked wilds and expanding grim reaper wilds appear. It gets into the spirit of the season and is sure to be an instant hit at NetEnt casinos.

As our spookiest-ever slot, Halloween Jack builds on the broad range of titles available in the NetEnt portfolio – it demonstrates once again that we never stop creating thrilling products for all players and all preferences, whatever the time of year

The five-reels of Wild Bazaar transport players to an exotic market, where they will find rich rewards such as stacked wild symbols, colossal wilds, linked and multiplier wilds. These are all hidden with treasure chests and can be unleashed at any time, either on their own or in combination with each other. It uses the same math model as their popular Fruit Shop slot machine, with extra design and bonus features to enhance the gameplay.