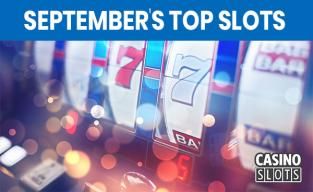 Some of the best developers of online casino games have been busy in September, launching a selection of slots into popular sites including Desert Nights Casino, Miami Club Casino and Slotocash.

Dead pirates stalk the reels of Ghost Ship, which comes from the studios of Realtime Gaming. Treasures are waiting to be uncovered when players spin the 5 reels of this 25-line game, winning up to 1250 coins when the ships bell lands across the screen. The Captain is a haunting wild symbol who can act as others to complete combinations, expanding across the reels to scare up some big wins. Players can also enjoy free spins, where winnings can be multiplied by up to 10x.

Also from Realtime Gaming, we have the majesty of ancient Rome brought back to life in Caesar's Empire. Caesar triples any payouts when he completes combinations, while the Coliseum is a scatter symbol, awarding 10 free spins where wins are doubled in value. Any time the Coliseum appears during the bonus games, it transforms in to Caesar or Cleopatra symbols, helping to reward players with even more prizes. This and Ghost ship can now be found at Slotocash.

Over at Miami Club Casino, players will find some new games from WGS, including Goblin's Gold. This classic 3-reeler comes with cherry, BAR and 7's symbols, along with a Treasure Quest bonus that triples wins when the multiplier symbol lands on a single reel across the payline. If two multipliers are on the line, the payout is 9x the base value.

Wealthy felines are the stars of Fat Cat, which is a 5-reel, 20-payline slot. Bags of cash, posh dogs and a Dollar sign scatter symbol all appear. Players are able to claim extra cash, with wins of up to 1,000x their total stake when they pick prizes in the bonus round.

Rival Gaming have also been busy in September, launching Jumping Jaguar and 5 Reel Circus into sites such as Desert Night Casino. Beautifully designed rainforest creatures are seen in Jumping Jaguar and players could be jumping for joy when they land up to 15 free spins with 3x multipliers applied to all wins.  During the free games, a special Hunt Super Round can be awarded, where only the high-paying symbols are seen, and a cascading reels system is in play. Symbols that make up a win will vanish, leaving spaces for new ones to drop in to, potentailly creating more winning lines. The black jaguar is an expanding wild symbol who helps out during base games and in the bonus rounds.

There are numerous special features to enjoy when playing 5 Reel Circus. All the fun of the fair brings wild symbols to players and there's a free spins feature where winnings are tripled in value. Players also get to pick their own lucky symbols that will help them out in each spin.