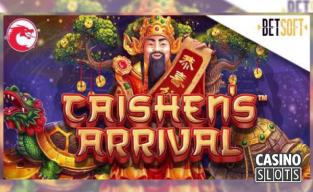 Players will discover a sumptuous Asian-inspired design in Betsoft's new slot, Caishen's Arrival. This high volatility, 5-reel, 25-line game can be played on desktop and mobile platforms for stakes between 0.25 and 5.00 per spin. Features such as stacked wilds and free games with multipliers will appeal to fans of the Oriental style as well as gamblers who like rewarding bonuses.

Ther lavish decorations on the reels include lucky bowls, bonsai trees, red envelopes, and playing card icons. Caishen himself is the Chinese God of Wealth and he can bring good fortune to players when he appears. He's a wild symbol who can fill entire reels and complete win-lines by acting as others.

This powerful symbol even acts as the scatter icon, helping players to enter the main bonus round.

On top of this, Caishen also triggers a free respin of the reels. He locks in place as other reels spin once more, giving players another chance to collect prizes.

A lucky red ticket on reels 1 and 5 at once brings further luck when it triggers 10 free spins. All wins during this round will be tripled in value, with the generous Caishen handing out even more cash to anyone who enters this special bonus feature.

Players have the option to gamble winnings, doubling their prize on the flip of a golden coin. They can gamble all or half of the win.

A New Game For Asia

Caishen's Arrival is the second slot in the new Red Dragon range. These games have been developed by Betsoft specifically for the Asian market, where the high volatility gameplay, fast action and potential for big wins are particularly popular.

“Caishen’s Arrival is a brilliant addition to our online offering and Red Dragon series. With a sky-high multiplier and plenty of pay-lines, players venture into a land of riches beyond expectation.”