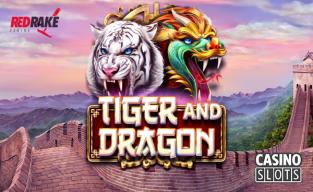 Tiger and Dragon is a new Asian-themed slot from Red Rake Gaming that's set for release on 10th October at online and mobile casino sites. Red Rake Gaming has just announced that the game has received certification in the UK, Spain, Italy, Portugal, Malta, and Sweden.

It's already been a hit in the -com markets and looks set to continue this huge popularity in these new markets.

About Tiger and Dragon

This is a 6-reel slot with up to 10 rows of symbols and a massive 1,000,000 different ways to win running across it. The number of active ways varies from reel to reel and spin to spin with the random appearance of blocker symbols. Unlike most slots, Ways to Win games don't use paylines and players win by matching symbols in any places across adjacent reels.

Tiger and Dragon uses stunning graphics to bring Oriental mythology to desktop and mobile platforms. The reels are set against the impressive backdrop of the Great Wall of China, while symbols such as playing card icons and Chinese letters fill the game itself. The tiger and dragon are the highest-paying symbols.

A cascading reels system sees winning symbols vanish from the screen, with new ones dropping down from above to fill the gaps. This carries on until no new winning combinations are seen.

Blocker symbols start to fill up a progress bar on the side of the reels. Once the bar is at 100%, players are rewarded with a mini Roulette game. The Roulette wheel is split between tiger and dragon sections. Players pick an animal and spin the wheel, picking up win multipliers of up to 20x their stake.

They can keep spinning the wheel as long as it stops on a section with their chosen creature.

A series of 5 cascades lead to a free spins bonus round. 10 free games begin, with rising win multipliers added to any cascades in a sequence. If the total win from this feature is less than 10x the stake, an extra 5 free spins will be added on.

Now that Tiger and Dragon has been approved by the licensing authorities in several countries, its popularity looks set to grow even more across regulated markets when launched on 10th October.