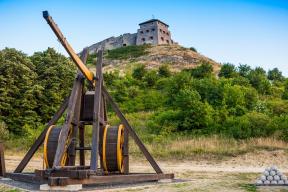 Different types of games have been brought forward to the realm of real money play in the past, and these include everything from casino titles to non-traditional skill games. Many of these skill games tend to fall under the category of social games, and we've seen social networking sites explode in the past decade accordingly. This has created a situation where there's a demand for social games that can be played for real money, and that's a demand that Wicked Witch Software is hoping to help provide in partnership with Gamblit Gaming for the Catapult King game.

What is Catapult King?

Catapult King is a social game that functions largely as a 3D version of something like Angry Birds. You're essentially launching rocks and other objects at a series of 3D castles and other structures in an attempt to save a princess-type figure. The game is extremely fun to play and has a ton of depth because you have to come up with different strategies to beat the more complex castles instead of just wildly throwing rocks at it.

In this new deal with Wicked Witch Software, a new version of this game called "Catapult King: Gamblified" is going to be developed. This new version will have gambling mechanics added in, and it's expected for a 2016 release date for mobile players in the United Kingdom. What's more is that there's a version that's going to be created for land-based casino operations as well, and that's going to bring the game to a whole new audience of players with a lot more on the line.

The Future of Social Gaming

Social gaming is typically seen as being a "for fun" activity, but it's a multi-billion dollar business. Tons of people spend money to upgrade their accounts, buy items and do other tasks inside of the games that they love, and it only makes sense that this is brought into the online casino world. This deal between Gamblit and Wicked Witch Software shows that this is a direction that the industry is going with respect to social games and mobile/land-based integration, so don't be surprised if you start seeing more and more social titles moved over and converted for online casino play.