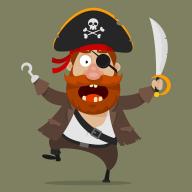 Hook's Heroes has been teased and talked about by Net Entertainment for several weeks now, and it's finally out in casinos now. This is a great game loosely based on the pirates from the Peter Pan stories, but the basic idea is that they are kids playing on a ship-shaped stage and in costume, and that adds a different level of fun and playfulness to the game. Typically games that include these characters take themselves too seriously, and that's something that NetEnt has avoided with this game.

The format for this game is pretty typical with five reels, three rows and 20 paylines. However, the graphics are particularly impressive and really capture the essence of the theme of the game. The Caribbean-inspired music and sounds are a lot of fun as well, even though the Peter Pan stories weren't set there. There are a number of different bonus features in this game, and they all give you chances to win extra payouts at random.

There are three random features that can happen in this game. You can get random multipliers, random wilds or a spin with the game switched to a 243-ways format. What's more is that when you trigger the free spins, you get to choose which of these features you want locked in for the remainder if your free spins. That's a really cool way to approach the bonus feature in the game, and it gives players a larger degree of control over what they're doing. This is just another example of Net Entertainment taking things to the next level and innovating when it makes sense to do so.

No Flash Without Substance

The first thing many players will notice about this game is that it has excellent graphics. What's important to realize is that Net Entertainment doesn't go over the top with 3D graphics with every single game they make just because they feel like it. This game uses a sort of 2.5D game with cartoonish graphics like what you see in video games like the Paper Mario series that really fit the theme of kids playing Peter Pan. This is different than some of the competition who seem to think that the 3D graphical style is the only style that they're capable of doing.