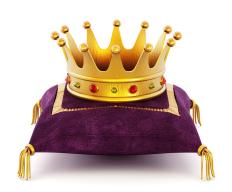 It's hard to break the mold when it comes to creating online slots. If you stick to the established formats that players are familiar with, then you get blasted for being unoriginal. If you do anything too far outside of the box, then people tell you that you're just coming up with goofy formats to get cheap attention. Net Entertainment has decided to do a little bit of both with their upcoming release King of Slots, and it really is looking like it could be the king with a really atypical format.

15. In case you think that you might be hallucinating, there will be 15 reels in this game. With three rows and 15 reels, you might think that there are going to be a crazy number of paylines. However, there are just 25, so you'll have little trouble keeping up with the winning combinations in the game.

When you break this far out of the mold with 15 reels, you'd better bet that you should keep a lot else about the game familiar to keep from being too different all at once, and that's exactly what they've done with this game. It has three rows and 25 paylines, so it'll be different enough to stand out without being so different that players won't want to try it.

The theme in this game is sort of a throwback to traditional, classic slots with a typical lineup of fruit and similar symbols. This game also uses sticky wins, wild symbols, multipliers and scatters. Free spins are also available. There's no news so far on how many scatters you'll need to win, but with 15 reels and a total of 45 spaces on the screen, we suspect that you'll need at least seven or eight to trigger a feature.

Just when you thought that Net Entertainment was going to settle into a pattern with their newest releases, they've brought out King of Slots. This game is scheduled to be available for players on November 12, and there's no reason to think that it's going to be delayed since games are usually finished up before the release dates are announced for online slots. It looks like it'll be a great game to try because of the high action factor, and we're anxious to get our hands on it.