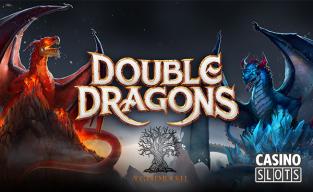 In time for the third quarter of 2016, Yggdrasil Gaming has released their newest game, a video slot called Double Dragons. The theme of this game is a battle between two different types of dragons, and it features dragon eyes and plenty of other 3D graphics on the reels. This game is up there with the most visually impressive titles that they have ever produced, and it shows that they are stepping up their game in a serious way.

This game has some features that really bring a lot of value into the situation. One of those features is stacked wilds that can be up to 28 symbols high, meaning that you have even better chances of filling up entire reels with wild symbols. On top of that, you can trigger the Double Dragons feature by getting four consecutive winning spins in a row. This feature gives you two completely wild reels to give you better chances to hit multi-line wins.

Yggdrasil has also set this slot up to reward players who play for longer sessions. You can collect different wilds from different dragon heads to get free spins as well, and the longer you play, the more heads you'll collect. During these free turns, the Double Dragons feature activates after only two consecutive pays, which adds even more value.

Yggrasil has already had a big year. They won the EGR B2B Slot Provider of the Year award along with the Gaming Software Supplier of the Year award for the IGAs. With Double Dragons, they're hitting another big release for 2016 that shows they can continue to bring new, high-quality titles pretty consistently. Not only that, but they have put together an atypical arrangement of features that provides a ton of action, so they're bringing the gameplay elements as well.

In 2016, Yggdrasil has shown that they're looking to grow even more, and this new release shows that. We won't be surprised to see them continuing to win awards for their slots into next year for some of the games they are releasing right now because of the way the awards cycles work, but we'll have to wait and see what happens with any other new releases between now and the end of the year.