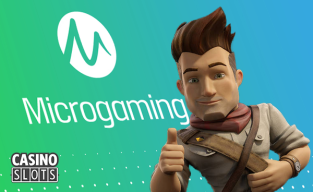 Microgaming is known for coming out with a very aggressive number of games. With their Quickfire platform in particular, since there are releases from several providers, it's rare that they have a month where they don't have at least five or six new games. Their newest title, developed in-house, is Jungle Jim, and it has a fun theme that's a bit different than what some people might expect. With a high hit-rate and an emphasis on a lot of character-driven action, this game is expected to give players a solid overall experience.

On the most basic level, the Jungle Jim video slot uses 25 paylines across five reels and three rows. The Rollins Reels feature is active in this game, which takes any title from 0 to 60 immediately. This means that winning symbols fall away after each turn to give more symbols a chance to fall into place and to give players chances for more wins with multipliers that go up to 5x. These multipliers get even larger in the free spins bonus feature since everything is multiplied by three overall, so the maximum multiplier available is an incredible 15x.

This game is based around the Jungle Jim character, and Microgaming has made sure that he's very visually appealing in terms of the graphics and symbols used in this game. As you search for El Dorado, you'll only have to spend a minimum of $0.25 per turn, and with the ability to win several times that in wins, especially with the Rolling Reels feature and free spins bonus round, it's clear that this is a game that players will get a lot of excitement about.

This game is expected to launch on September 7, so they're definitely starting off the autumn months with something big. They'll probably have several more new titles come out during the rest of 2016, but this game is where it's at right now. It'll be available on both desktop and mobile, and you'll be able to find it through both the Viper and Quickfire platforms. This is probably going to be the last big release of the summer for Microgaming, and they've definitely created something that's worth checking out.