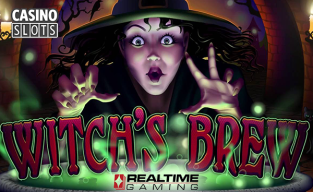 The holidays have always been a big time for online slots because a lot of games are based on certain days around this time of year. Halloween is particularly good as a theme for online slots because of all of the different angles developers can take with it, and that's what Realtime Gaming has done for their upcoming release of Witch's Brew. This is their newest release, and their first big release of the autumn months.

About the Witch's Brew Online Slot

As you can guess from the name and the October 4 release date, this game has a Halloween theme. RTG has released that this will be a 25-payline video slot, and though you'll have the option to play with fewer paylines, we can't recommend it. Instead, you'll have plenty of flexibility on changing your bet size, so lower that if you need to instead of playing with fewer than 25 paylines. Playing with 25 is how you can maximize your RTP in this game.

Free spins are the order of the day in this game, and players can earn up to 125 free turns at a time for five of the scattered Goblin Blood symbols. Three or four will get you 10 or 25, respectively, as well. As if that wasn't enough value for a bonus feature, all of your wins are hit with a 2x multiplier, and all of the wilds appear stacked during his feature as well. It's clear that a ton of value is wrapped up in this free spins bonus round, and it's all about the creepy characters that will look on as you shoot for this feature.

We're moving into the final stretch of 2016, and it's a very important time for Realtime Gaming. For a while there, they got a bad reputation for putting out sub-par content with the occasional hit. They took the criticism of their games seriously, and the RTG of today has built up a ton of momentum in terms of putting out very high-quality games for a couple of years now. If Witch's Brew turns out to be a hit, which by all means it should, then this will be enough momentum to carry them through the end of the year and on into 2017.