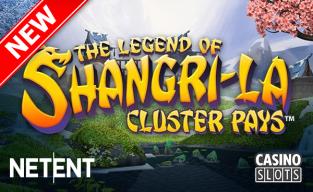 New games with lots of action have been one of the things that has driven Net Entertainment to the top of the online slots world, and they're at it again with their latest announced title: The Legend of Shangri-La: Cluster Pays. Shangri-La is a sort of legendary paradise where wealth, happiness and all kinds of great things are found, and that's the focus of this game, as you can see in the background and on the reels.

Everyone who plays this game will notice right away that it doesn't use the typical format. Instead, it's much larger with six reels and five rows as a part of the Cluster Pays series by NetEnt. This means tons of ways to win and plenty of screen real estate for triggering big features and huge winning combinations.

You'll also have a plethora of ways to get extra payouts including sticky re-spins, random wild symbols, reels that nudge to give you wins you would have missed otherwise and a free spins feature. The fairy tale land that this game is based on isn't just limited to the graphics, and as you can see here, the gameplay is a very serious part of it as well.

The Cluster Pays series of slots by Net Entertainment is a good example of how they are always bringing something new to the industry in general. They have all kinds of different series they have been working on, like the NetEnt Rocks! series that made so much attention in 2016. Titles like The Legend of Shangri-La slot show that they have been keeping that momentum going in 2017 as well.

Who This Game Will Appeal To

If you spend much time at all in the online slots world, you'll know that different types of games appeal to different types of players. This game is one that will appeal the most to players who like a high level of action and who don't mind a higher volatility in exchange for a ton of value tied up in big bonus features. If that describes you, then this new release is something you'll definitely look forward to playing.

The Legend of Shangri-La