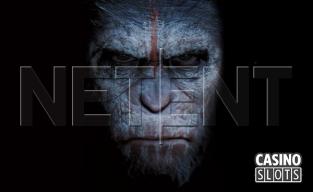 Net Entertainment has made a number of extremely popular slots over the year, and they're adding yet another to the list with their upcoming Planet of the Apes slot. A lot of information has been released lately about this upcoming game, and we're going to break down everything that we know so far about this exciting release.

In each of these, you will see characters from the respective films on each side. This includes both humans and apes, and you'll notice that the colors and styles of each side are different as well.

If you play this game on mobile, you'll notice that you'll only have one set of reels on the screen at a time. You can switch between them, however, so the lack of screen real estate is not a problem. You'll still get the same high-action gameplay as the desktop version along with all of the bonus features and opportunities for free spins and more. With a strong pay table with some good payouts for the top prizes and a lot of feature-based gameplay, this slot is looking like it will bring the same excitement of the films to the reels when you get in on the action.

Net Entertainment has had a fairly strong year, but a lot of people have compared it to 2016 in a disappointing fashion. NetEnt had such a good 2016 that industry experts knew it would be difficult to match in 2017, but they've done a pretty good job. They've announced full-VR games coming up soon along with a number of extremely popular slot releases, including big names like Planet of the Apes. They still have another few months to pull out something huge before the end of the year, and if we know anything about this company, we know that they're able to bring out an industry-changing title at any time.