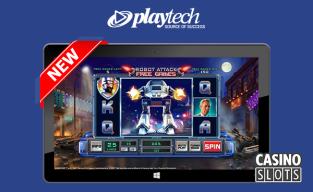 If you were around in the 1980s, then you knew all about Robocop. The series of movies was all about a cop who became a cyborg after a devastating and brutal attack, and he can do things that other cops can't do in the crime-ridden, futuristic city of Detroit. Playtech has produced a new Robocop slot that's based on these films, and it has plenty of content straight from the movies as well.

Robocop's mandate is to "Serve the public trust, protect the innocent and uphold the law," and you could probably add to that the fact that he's going to help you to get some big payouts on this new slot. You'll get a chance to shoot extra wild symbols on the reels after each spin, and you can also get multipliers worth up to 5x on your payouts. The main competitor to Robocop in the cyber crimefighting unit scene is the ED-209, and it acts as a massive 3x3 wild that covers up to nine spaces.

This slot has five reels, three rows and 25 paylines with a range of bet sizes. You can get a set of free spins in this game with better chances to win, and there's a turbo mode that allows for rapid-fire play without delays between spins. It's geared up to bring you a tremendous, action-packed experience that will rival the action of the original movies from the 1980s. This is a game designed to bring the movies back to life, and it's definitely for players who enjoy a lot of action.

Playtech has very widespread interests at this stage of the online gambling industry, and the casino side isn't their main focus. With that having been said, they still bring out big releases a few times each year to remain competitive, and the Robocop online slot could be one of their biggest of the year. It's a quality game that may or may not win any major awards, but they've been around since 1999 and won plenty of awards in the past for their games, so it's not like they are lacking recognition. They have an omni-channel approach, so this game will immediately be available for mobile, desktop and retail shops for a maximum level of flexibility.