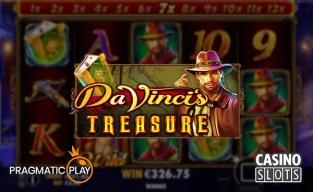 Da Vinci's Treasure is a new slot game that follows the adventures of John Hunter, a fictional explorer as he searches for lost artefacts. It comes from Pragmatic Play and features the high-quality artwork and exciting features associated with this games developer.

This 5-reel, 25-line game has symbols of the incredible inventions of Da Vinci, such as a helicopter and crossbow, plus books, rucksacks and the high-card symbols. Jack Hunter is the highest-paying icon, while Da Vinci himself is a wild symbol.

The Codex is a scatter symbol that takes players to any of three bonus rounds. Free spins with win multipliers increasing on each spin can lead to some big rewards, plus there's a quick round where players select a painting to reveal a cash prize.

In the Map Quest feature, 23 squares are seen, and a spin of a bonus wheel moves players along the map, collecting payouts until the game ends or they reach the 23rd section, where a win of 100x awaits.

At the end of each round, players can try to boost their wins by between 2x and 5x, selecting from boxes which can significantly boost their earnings.

This stylish slot can be played at online and mobile casinos from stakes as low as 0.25, up to 125.00 per spin. It comes with a theoretical retrun to player percentage of 96.53%.

We are delighted to unveil our latest show-stopping slot, Da Vinci’s Treasure. Its immersive storyline and thrilling bonus features make it one of our most jam-packed games yet.