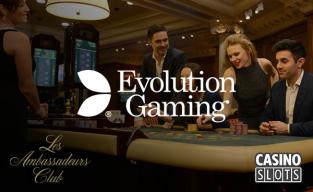 Evolution Gaming is one of the top providers of live dealer games to online casinos around the world. In an exclusive argreement, they have partnered with Les Ambassadeurs Club in Mayfair, London which will bring some of the top games to online and land-based punters at the same time.

Les Ambassadeurs Club, or Les A as it's widely known as, is one of the top casinos in London, and has been welcoming players for nearly 200 years. Times have changed and in an exclusive deal, they are going to feature a number of Evolution Gaming tables at their casino, which can be accessed by punters at the site as well as online players.

The games will be found in the Salle Priveee which is found behind the scenes at the Mayfair address of Les A. Players will find Baccarat and Roulette tables, which will be open to customers of the casino as well as punters at a number of specially-selected online operators.

The Salle Privee will offer the highest standards of service to players, and will be open 24/7. Dual play Baccarat and Roulette tables will be featured. Players at Les A will be able to enjoy the games alongside punters at the online and mobile casinos which are part of the exclusive club that Evolution Gaming has chosen.

Players can choose the pace of their games, request a change of dealer, or ask for a new shoe or ball. This Dual Play format will bring the ambience of Les A to online players, while giving customers of the Mayfair casino the chance to play games with a wider selection of gamblers.