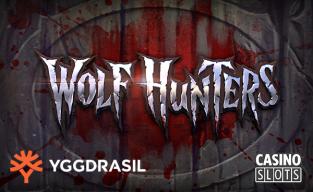 Wolf Hunters is the latest slot announced by Yggdrasil Gaming. It transports players to a medieval setting, where werewolves are terrorising a town. Players collect special rewards as they battle these foul beasts across the 5 reels and 20 paylines.

Taking On The Werewolves

An introductory video takes players to darker times, A gothic-style town sits behind the reels which are filled with symbols such as wolf-traps, stakes and poison bottles. Hunters stand to either side of the reels, waiting to attack. A wild symbols subtitutes for others and awards a free respin when it's seen, locking in place for the extra game. If more wilds are seen in the respin, these will also stick in place for further spins.

Landing hunter bonus symbols on reels 1 and 5 will trigger 10 free spins, where they have a better chance to defeat the werewolves. Players power up the Hunter and Huntress characters, triggering 2 extra free spins with expanding wild werewolves.

More features inlcude the Hunter free games, where hunters are filled with Rage, to help them in the fight. In the Slayer free spins, extra wild werewolves are seen on the reels.

Wolf Hunters is playable from 0.20 to 100.00 per spin. It's mobile compatible and comes with a high return to player ratio as well as a maximum win of 2,500x the stake.

This game has a great deal going for it, but the first thing people will notice is the amazing ambience, which really draws you in to the game.