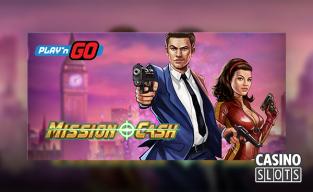 Casino games developer Play'n GO give players a new mission to carry out from September 19th. That's when their new Mission Cash slot gets launched at online and mobile compatible casino sites. Mission Cash is a spy-themed game, where players can take a shot at landing expanding wild symbols, respins and free games in every spin.

You Only Spin Once

Players meet an elite team of secret agents. A male and female agent are joined by a seductive woman in a blue dress and an ingenious inventor who supports them from his control room. Mission Cash is a 5-reel, 20-line game that captures the thrills of TV shows and films from the 1960s that featured spies and espionage.

A comic strip style brings these characters to desktop PCs and mobile devices, with players able to use stakes from 0.20 to 100.00 per spin.

Gun crosshairs move around the reels in every spin. If they land on the blue or red agents, the characters become expanding wild symbols, filling whole reels and locking in place as other reels respin. If the crosshairs land on an agent in the respins, the feature repeats. This Take the Shot feature gives players a great chance to collect big wins.

The Slot With The Golden Reels

A gun against a gold backdrop is a special symbol, launching 8 free spins when the crosshairs land on it. During the bonus games, all 4 character symbols can become expanded wilds and trigger the Take the Shot respins. If the crosshairs target the gun in any free spin, 8 additional games are added to the end of the round.

Mission Cash is a high-action, high-volatility slots game that comes with overall returns of 96.56%. Players will be able to join this adventure when it's launched next week.