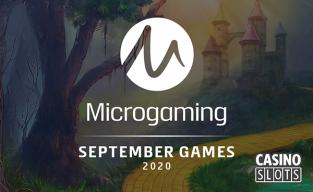 Microgaming, in partnership with their network of independent studios, has a number of new slots for release throughout September. These include new additions to the WowPot and Mega Moolah progressive jackpot networks.

Book of Atem WowPot launched on 1st September. It's the 2nd game with a WowPot jackpot, following on from Wheel of Wishes. Book of Atem comes with a high volatility and features such as free spins and expanding wild symbols.

On September 7th, Sisters of Oz became the 3rd WowPot slot. Developed in conjunction with Triple Edge Studios, it's a 5-reel, 20-line game with Jumbo Block symbols. These appear in every free spin, while Golden Oz coins unlock the WowPot feature where huge progressive prizes await.

Fortunium Gold: Mega Moolah comes from Stormcraft Studios. It's a Steampunk style game that launches on 22nd September, and will feature mystery symbols, free spins with mystery reels, and the chance to grab a multi-million progressive win.

Noble Sky will take flight on 29th of the month. It comes from Neon Valley Studios and will have 5 reels crosses by 25 lines. This low to medium volatility game features Airship Wild Respins, a bonus trail, and a Vault Bonus round where players can claim up to 5,000x their stake.

Other titles set ot join the Microgaming network this month include Stallar Portals from Snowborn Games, Almighty Aztec from SpinPlay Games, and Spectre Estate from Just for the Win.

Look out for these and more at Microgaming online and mobile casinos this month.