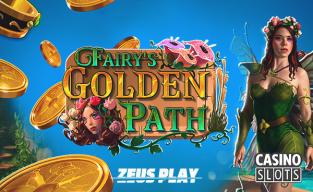 Online casino games supplier Zeus Play have revealed a brand-new slot. Fairy’s Golden Path takes players to an enchanted forest where they will meet Zephyr, a beautiful fairy who has the power to unlock extra wins and valuable respins.

Take a Trip to a Magical Forest

This is a 5-reel, 20-line game that’s compatible with PCs and mobiles. Players will encounter magical rings, stags, gold coins, and high card symbols on the reels. The star of the game is the fairy herself, and she’s a wild symbol who can stand in for others to complete combinations.

Zephyr expands to fill all 3 rows of any reel before she triggers a Golden Path feature, where the reels respin as she moves one reel to left in each round. If more examples of the fairy land in a respin the round continues until they have all moved out of view. Fairy’s Golden Path is a medium volatility game with average returns of 97%.

Based in Thessaloniki Greece, Zeus Play are behind around 50 popular slots, plus a range of lottery and Keno games. The company is fully validated by Gaming Labs International to guarantee fair play and reliability across their portfolio and have several partnership agreements in place with major operators such as Bet Logic and iSoftbet.

Fairy’s Golden Path joined the range of slots from Zeus Play on 15th September 201. Others in their library include Amun’s Book, Captain Nelson Deluxe, and Super Hot Barbeque. Check out their whole range here at casinoslots.net