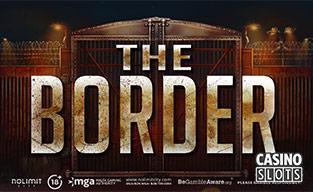 The Border is a new slot from Nolimit City with a typically controversial theme and the exciting gameplay that this innovative developer is famed for. It’s their first Cluster Pays game, where blocks of matched symbols form winning combinations.

Head to The Border

Guards, a sheriff, downtrodden migrant, and vultures are among the symbols on a 6x6 grid. Winning symbols trigger cascades that repeat if another win forms. Multiple modifier symbols can help, with xWays transforming into multiple examples of any other, xSplit turning wild as they split symbols to their left, and xBomb wilds exploding as they build multipliers.

xNudge Cluster Wilds nudge and build multipliers, while 6 or 7 scatter symbols trigger Mule, or Coyote free spins features respectively. It’s easier to split symbols, expand the grid, and build multipliers during either free games round, and it’s here that players can reach a vast 44,288x their stake maximum win.

Nolimit City rate The Border as an Extreme volatility game, and there’s an average RTP of 96.17%. Players can join the action on PCs or mobiles, and The Border joins other popular slots, such as Road Rage and Das xBoot at the top online casinos.

The Border portrays the ruthless divide between two worlds. We’ve truly gone all-out with this slot, being our first cluster game. Our xMechanics will be popping off all over the place and you’ve got yourself a seriously bad-ass slot in The Border.