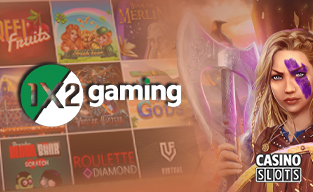 Introduced in 2002, 1x2 Gaming is a software company that started off as a virtual Football specialist, but they soon expanded their operations to fixed odds and various types of casino games.

As of 2017, they run their own 1x2 Network, which includes 1x2 Gaming, Iron Dog Studio, and a couple of strategic partners - Probability Jones and Leap Gaming.

The aggregation platform has managed to gather many slots creators, which means that it keeps digging up new cool sources of content for avid gamers.

It’s clear to see that the graphics and animations department gets things improved with each and every new release. Some of them are as simple as it gets, but the newer games come with elaborate animations and show us what their graphic designers are really capable of.

…we believe there’s room for improvement when 3D quality is concerned, but we should point out that the games aren’t disappointing at all.

When we’re speaking of features, unique reel sets, and bonus games, it’s fair to say that the folks at 1x2 Gaming don’t skimp on the entertainment factor. You will be greeted by a plethora of extra spins, wild substitutions, and bonus games, and the maximum payouts vary a great deal across the games equipped with five, nine, eleven, twenty, twenty-five, or fifty paylines in most cases.

What About Different Slot Themes and Types?

From the simple ones, old school fruit machines, all the way up to the latest ones inspired by mythical creatures, they seem to have it all. There are cartoonish slots that seem as if they’ve been inspired by the most cutting edge motion picture movies, and there are also those who rely on wondrous mechanics and mathematics to draw your attention.

Their portfolio of games may not be the largest one around, but you’ll be pressed hard to find one that offers more diversity, themes, and different options.

Let’s take a closer look at the games, shall we?

Book Of Loki - It’s a 5-reel game inspired by the great Loki of the Aesir who come from the land of Asgard. The great Nordic warrior needs your help on his quest for a special book with magical powers.

Reel Fruits - Over here we have a glitzy lounge-style video slot that’s all about relaxing, chilling out, and possibly, scoring some cool wins. A new take on the age-old concept of classic fruit machines.

Irish Love - Taking place at the Emerald Isle in Ireland, this one is all about Leprechauns and Fair Ladies, and your own private little quest to bring you bucketloads of fortune.

Book Of Merlin - Have you ever dreamed of becoming a wizard? Well, this game certainly can make such dreams become reality, as it puts you in the role of the legendary wizard.

Big Hitter - This is a big, juicy homage to all the classic slots of yesteryear, in all of its full retro glory. It packs a classic 3x3 layout, but comes armed with many multipliers to make things even more interesting.

All things considered, these guys are destined for great things. Just by looking at the learning curve incorporated over their video slots timeline, it’s clear to see that they’ve been always improving…

Their future products will surely provide us with even more entertainment, that’s for sure!

Alice and the Red Queen

Celebrity in the Jungle

Review
Play
load more load all
There are 47 slots remaining