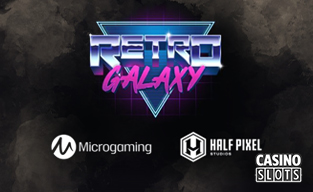 Even though we do not know much about the people who represent Half Pixel Studios, we have seen that they are really good at making slots. Their first-ever title called Retro Galaxy came into the limelight in August 2020 as part of the striking lineup of Microgaming’s novelties scheduled to be launched that month.

The gambling community hadn’t heard of this software provider before they partnered with one of the strongest players in the iGaming industry. However, this cooperation is, obviously, a win-win situation for both sides: while Half Pixel was able to leverage Microgaming's reputation and a huge network of operators, the Isle-of-Man behemoth replenished its extensive range of associates with one more innovative team.

Which Microgaming’s Slots Are Made By Half Pixel Studios?

So far, the fruitful collaboration between Half Pixel Studios and Microgaming has resulted in just one virtual one-armed bandit but we are pretty sure, numerous spinning adventures are waiting in the wings.

Let’s take a closer look at Retro Galaxy, which was a great success thanks to its crispy graphics, a host of engaging extra features, and an impressive winning potential of 7,300x bet. The game quickly became popular among online casino players, all the more so, it offers a very affordable for a 243 ways-to-win slot betting range, which starts at just $0.20 a spin and goes up to a maximum stake of $20.

…this futuristic adventure invites punters to dive into the grooving punk era that offers five reels, three rows, and 243 ways to win. It’s worth mentioning, that apart from a striking winning potential, this space-age story can brag of a solid RTP – the games return to players 96.05% of all staked money (in the long run, of course). It also boasts a decent set of special symbols, including wilds, scatters, and free spins icons, intended to increase your chances of completing winning combinations.

Advantageous Extras As Key To Success

However, the unique Rolling Reels™ feature enhanced with Multiplier Trails is the one to deserve special attention as it significantly increases players’ chances to hit a win, and what’s the most important, without placing another bet. If you’re still unaware of such a great bonus, it’s time to give it a shot, at least in demo mode.

Retro Galaxy is not the first slot…

…to offer this extra, which can be found in some other recent releases created by Microgaming’s independent studios such as Absolootly Mad: Mega Moolah. For those online casino players who are not familiar with Rolling Reels™, here is how this sophisticated add-on works. Available both in the base game and during free spins, it is activated by any win, except those created with the help of a scatter symbol. The latter, by the way, appears on reels 1,3, and 5 only.

After your prize is paid out, the winning icons are removed from the reels while the icons from above moved one position down to fill the empty spaces. The great thing is, every subsequent win triggers a new rolling reel, boosting your odds to land a hefty prize. In addition to that, you can count on fantastic multipliers – of up to 5x in the base game, and up to 15x during the free spins feature.