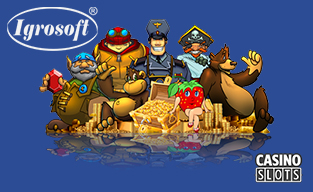 Igrosoft is a Russian gaming company that is heavily invested in land-based casino products. It is headquartered in Moscow, and has been operating in one capacity or another since 1999. Without a doubt, its venture into the online slot space has been considerably slower than with other software companies, and this is perhaps because it is heavily invested in the hardware side of things as well.

But now that they are here, what can you expect from Igrosoft slots? Do they provide other gaming products, and what makes these games stand out? On this page you can find individual slot reviews, a way to try the games in demo mode, as well as our suggested online casinos where you can play for real money.

An interface for old-timers

It’s quite obvious that most of these games are direct ports from the video slot terminals the company produces itself. This is evident from the way the interface is set up. Rather surprisingly though, this doesn’t mean that the game wouldn’t be playable on all devices from smartphones to desktops. It gives a rather nice tinge of nostalgia or even a retro look that friends of classic slots might find quite endearing.

Not to worry though, modern options like autoplay are also available, as is support for different currencies, muting and such.

Igrosoft’s online slots come, almost without exception, with between one to nine paylines. The reel structure is likewise almost always in the familiar 5 x 3 format. Winning combinations are created by simply landing matching symbols on the paylines, running from left to right. Playing is always as easy as setting your bet and letting the reels roll.

When the company made the move from land-based gaming to online gaming, a process that is still ongoing, it also started adding more complicated bonus features. Originally, this might have been limited to just the famous gamble feature. Nowadays, you can land scatters for extra spins, take advantage of wilds and bonus symbols, and even play mini-games that are unique to each title. It’s not the most adventurous selection of specials, but it is slowly getting there.

Like the bonus features, the graphics have slowly been improving too. Especially when playing on mobile devices that come on smaller screens. Though a lot of these games are simply converted from their existing selection, there’s clearly been some work done to make the games look better and run smoother.

And we wish we could say the same about the music and sound effects. It has improved a little bit, but most of the time it feels like you’re listening to a video game from the early 90s. One or two titles have been released with a better sound already, but the rest should definitely receive an update. Until then, there’s a good use for the mute button.