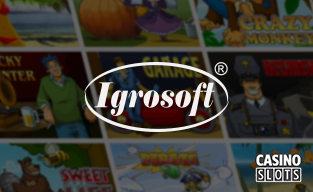 Igrosoft is one of the rare software and casino companies to come out of Russia. Its headquarters are located in the metropolis of Moscow, established there since it began operating in 1999. It remained a land-based manufacturer for quite a bit, jumping on the online bandwagon relatively late.

As an interesting note, not only does it excel in the area of programming, but this company also manufactures the physical motherboards and other parts that land-based terminals require. As such, you can be sure that the company really does know what they are doing.

When it comes to games, Igrosoft is all about slots. No table games or other experimental products are available, just pure slots. And on that, they are very much aimed at the classic slot markets. The themes are a bit more diverse than just basic fruits, but that’s pretty much as far as the company has gone.

It’s all about five reels of three symbols each, with a varying number of paylines. One good side of this is that the paylines tend not to be fixed. You can pick and choose what you want. Its first few slots were direct ports from land-based slots, and as such quite primitive in a way. Graphics have come a long way since, but the sound effects and music are somewhat lacking still.

Bonus games and features are a bit more advanced, though don’t expect to run into the latest iterations tried out by other software companies. Extra spins, pick a win and even some mini-games are available.

It’s not quite clear which of the two is more important for the company: the games or the gameboards. It seems like Igrosoft is a massive supplier of the latter, and if it is to be believed they are definitely the biggest company concentrating on this area in Eastern Europe, and perhaps Europe in general.

When it comes to online slots, the company is paired with famous providers and casinos like EveryMatrix, Betsson and Slotegrator. If we can gather something from all this, it’s the fact that the company does have plenty of know-how, especially when it comes to technical and programming knowledge. It remains to be seen how and when that will be converted into the dominance of the online field.

All programs and games have successfully passed testing from iTech Labs, ensuring that the random number generator is, as the name suggests, completely random. Though the company itself doesn’t hold national gambling licenses, its partners are some of the biggest names in the industry. This should ensure security and safety.

It’s safe to say that the company has experience and knowledge, but this doesn’t quite extend to the online scene as of yet. Sooner or later the company will have to commit fully, and if they do so they can go far. But for now, these games are best suited for friends of nostalgia and classic slots.