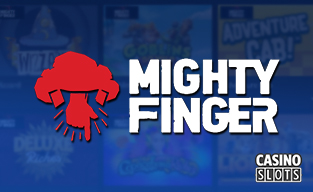 Since its inception in 2019, Mighty Finger has strived to show the gambling community that they are good at making all types of slots. The company debuted in a traditional style with a 3x5 playfield enhanced with 20 pay lines, letting players test the winning potential of Goblins Go Wild and Wild Gruff Crossing.

However, the brand’s third masterpiece called Wizzard already boasted an enlarged 5x5 grid spiced up with cluster pays and an impressive set of extra features. Shortly after the successful launch of Wizzard, Mighty Finger came into the limelight with its next release - Adventure Cab, a cascading slot like no other. It has seven reels and only one row, and the plot is so hilarious that this game is worth spinning just for the theme itself.

As incredible as it may seem, in less than a year, this software provider has managed to assemble a truly diverse collection of slots to suit a broad audience of Casumo casino. Yes, you read it right, all products made by Mighty Finger are available exclusively at this great online gambling venue, which is close to complete the acquisition of CasinoSecret.

It’s worth mentioning that players do like MF’s slots and for a good reason. Some of them can brag of really striking maximum win – of up to 9,000x bet. They also come with a wide range of stakes that usually goes between $0.1 and $100, as well as solid RTP, returning to patrons at least 96% of all staked money in the long run. Speaking of volatility, people behind the brand have tried their hand at all three types, offering low-, medium-, and high-variance titles.

Mighty Finger has tried out not only for a wide range of themes, different reel mechanics and volatility levels but also for classic 3-steppers, which is a pretty rare phenomenon among the younger software developers.

Exciting Joker Deluxe is a great example of a timeless one-armed bandit with its 3x3 grid and well-beloved juicy symbols. The game has five pay lines and cheerful Joker plays the role of a sticky wild ready to substitute for all other icons in order to complete your winning combination. In addition to that, the gameplay is amplified by generous multipliers and re-spins.

In case you fancy…

… fruits and bells in the 5-reel edition, here is Deluxe Riches XXL – a high-volatile 5x3 extravaganza chock-full of lucky red sevens, horseshoes, and, of course, juicy flavors. The game features 100 pay lines and an impressive max win of $250,000. By the way, it’s a sequel to Deluxe Riches that has the same theme but only 10 pay lines.

Wonder, which Mighty Finger slot poke out of the crowd? Well as things stand now, it’s Oddin – a 6-reel and 4-row thriller that offers 4,096 ways to win up to 8,000x bet, Avalanche cascades, as well as multipliers and expanding wilds in the free spins feature. But you will also have a lot of fun spinning the reels of incendiary Calaveras Gold that celebrates the Day of the Dead with sliding wilds and Mighty free spins boosted by wild multipliers.