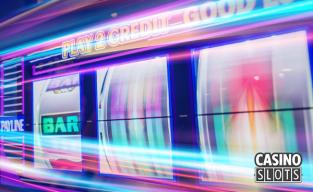 By the early 1940s, slot machines found their place in the sun of the gambling world. The Mills Novelty ruled the market and successfully introduced some innovations: the bell disappeared from the reels and the double jackpot became a new attraction.

Popular than ever, fruity entertainment pushed its way to all casinos in Las Vegas, and, of course, to the fabulous Flamingo Hotel and Casino opened in 1946 by Benjamin “Bugsy” Siegel.

Undoubtedly, the legalization of gambling in Nevada in 1931 was a big turning point for the whole gaming industry and for its three-reel representatives in particular since their number was not limited by the laws of the City of Lights. All establishments could offer their guests uncomplicated fun paying just $10 per machine per month for the license.

While the business was on its way out of illegal speakeasies …

… into legal streams still, it was under the influence of the organized crime. One of the most prominent gangsters of that time, Benjamin Siegel ignited an era of glamor and gambling by building a luxurious resort on the desert highway between Las Vegas and the McCarren airport. It cost him nearly $6 million, but just after one month after extravagant opening in December 1946, the casino was closed due to financial loses.

...it was locked just for a couple of months, and on March 1, 1947, Bugsy tremendously celebrated the re-open of its high off the hog gaming mecca.

To build such a place was his long-time dream plotted on offshore gambling ships he set up in the late 30s. As we all know, he was shot dead very soon after his dream came true – on June 20, 1947, at the place of his sweetheart, stunning actress Virginia Hills. At the same time, other members of Eastern crime syndicate entered the Flamingo Hotel and declared a takeover. 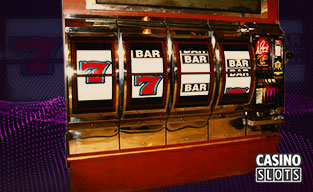 Times have changed and a lot has happened in the 1950s. One-armed bandits were extremely popular all over the world, with some old names to continue their stories and some new big players to enter the industry.

Lens Ainsworth and his Aristocrat (yes, the company is still going strong today!) launched three-reel the Clubman, the New Clubman, and the Clubmaster on the expanding Australian market. In Germany, NSM presented the Mint Record and the Mint Super while Gunter Wulf created the Primas and the Duo-Matt.

… and was powered by 5 hp electric motor”

Unfortunately, the Mills Novelty, which in 1946 re-branded its slot division as Bell-O-Matic, started to collapse producing mainly ice cream and drink vending machines by 1956. Another USA enterprise Service Games moved to Tokyo and started to manufacture their Sega Bells.

Slots of that period were able to accept larger amounts of coins, which led to higher potential payouts and, of course …

… more significant revenue for casinos. It was also a time when the Big Bertha became trendy even against the fact that this extremely expensive to produce appliance had the worst ever return to the player. The odds of hitting a jackpot spinning eight reels of this giant were just one in 15 billion.

Just in a couple of years...

...Bally Technologies would introduce the first electro-mechanical slot and mark the beginning of its long-term supremacy not only in Las Vegas but also across the globe. Amazingly, this company continues to deliver beloved fun in our days of online casinos and top-notch video slots.