What’s the most exotic country for software companies? Have you ever tried games coming all the way from Taiwan? Well, now you can, as we’re going to talk about a Taiwanese company called CQ9 Gaming. So, who are these guys, anyway?

They have only started off in 2016, but in only took them a few years to become one of the fastest growing Asian software developers, but this is mostly due to the fact that they keep entering new markets all around the globe.

On top of all this, it seems like they like to sign partnership deals with other industry companies, only to keep growing and conquering even more markets.

Sorry, there are no casinos by CQ9 Gaming available in your country. Try these casinos instead.

The main problem with most older companies is that they get stuck in their routine, and they are often afrain trying new things. CQ9 Gaming is at the opposite end of this spectrum, and it seems that they have no problem with experimenting and trying various new ways of reaching even more players and coming up with innovative gaming concepts.

Even though they can’t really be credited for world domination, these guys can only be characterized by excellence in animations and graphics, groundbreaking game features, and a whole lot more reasons why the number of online casinos that feature their games is rising.

Over time, these guys have amassed quite a lot of different companies they do business with, and the number of white label providers and online casinos that deal with them is always on the rise.

For a company hailing from Asia, it was a major breakthrough to start conquering the European markets, and one of the first deals they’ve struck over there was with Slotegrator. Also, let’s not forget the fact that all of their games come with an exclusive certification from Gaming Laboratories International.

What About the Games?

In spite of all the experimentation, some things remain constant in most games from the CQ9 Gaming portfolio, and those are Asian themes and jackpots. It is fully understandable that progressive jackpots are highly popular among players as they provide them with the ability to score massive amounts of cash over a relatively short period of time.

With a development team so impressive that it can easily rival some of the industry leading companies such as Microgaming or NetEnt, these guys have grown quite a fanbase, and that’s mostly due to the fact that they offer an eclectic mix of different games for all different types of players out there.

Upon first glance, most games in the portfolio are based on various Asian themes, including star signs, folk tales, heroes of ancient times, a vast array of mythical beings, dragons, and so on…

On top of it all, the Asian developer has managed to pubhlish some classic slot games, and when you draw the line, they have more than a hundred top notch games in their portfolio and here they all are:

All things considered, CQ9 Gaming is definitely one of the rising stars among Asian software providers. They have a large portfolio of diverse games, and all of them are top shelf in terms of quality.

On top of all this, they seem to be very smart as they conquer various markets all across the globe. Striking lucrative deals with important industry brands have brought them nothing but prosperity so far, so we’re expecting them to blossom even more in the future. Keep an eye on these guys, they are really going places! 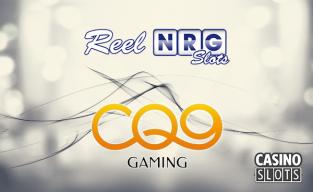 London-based ReelRNG and Asian games platform provider, CQ9 have announced a new partnership that will see ReelNRG slots made available to a wide...