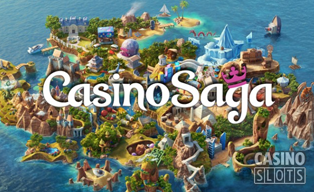 Today we received a marketing pack from Casino Saga, they are a new online casino site that are preparing to launch onto the World Wide Web. This Scandinavian brand has thought outside the box and have come up with something new and refreshing for its players.

Instead of just going to their site and playing a selection of games, you also get to take part in a quest where you are trying to retrieve a Golden Crown from the evil Betser.  Before you start on your journey, you will be able to select your very own hero to play as.  There are 10 different heroes in total, each with their own individual stories.  The heroes have taken inspiration from popular; films, TV shows, books and games, so you can expect to see some familiar faces.

To move forward on your quest, you have to play their casino games.  They have games available from both NetEnt and Betsoft, so there will always be something exciting to play.  Some of their Saga Edition games will be locked and can only be played once you have beaten the relevant ‘Boss’.  There are 50 bosses in total and each time you beat one you will win additional prizes.

Casino Saga has not fully launched; however, you can still sign on up to their site in preparation.  We have included their background story video of the site below.