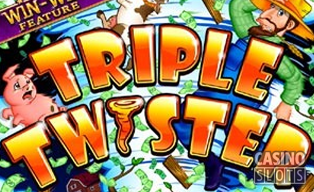 They say lightning never strikes the same place twice; however, a new player known only as Mr S went on to win big not once, but twice at High Noon Casino.

A win like this is a once in a lifetime thrill. To do it twice in one weekend, well, that’s beyond good luck and we’re very happy for the player!

Mr S decided to sign up to High Noon Casino on Friday the 28th of March.  He made a $350 deposit and took advantage of their generous 75% deposit bonus. He then went on to play RTG’s Triple Twister slot game and scooped himself a gigantic $249, 875 win during the games free spins feature.

Just three days later he went back to the same 5 reel and 50 pay lines video slot game and won a further $168,960 on its impressive free spin round.

Mr S couldn’t believe his luck when he won and is planning on spending some of his winnings on a brand spanking new car and a family vacation. Congratulations, Mr S!