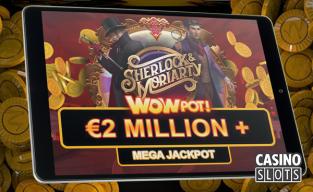 Launched in February 2020, Microgaming’s WowPot progressive jackpot has just paid out multi-million prizes twice in less than a week. The latest huge win was for €2,025,388.75 and claimed on the Sherlock & Moriarty WowPot slot by a lucky player at Napoleon Sports & Casino Online.

The Belgian player scooped their huge win on 19th April 2021, which is only five days after a staggering €17.5 million win. That prize was the first time that a top-tier WowPot jackpot had been won.

Jackpot Prizes From A Famous Detective

The latest win s the first multi-million prize from the Sherlock & Moriarty WowPot slots game. This game comes from Microgaming’s independent studio partner, Just For The Win. It’s the fifth title in the WowPot jackpot range and takes place in Victorian London, where a famous sleuth is up against his arch enemy across the 5 reels. On its very first day of release back in March 2021, the Sherlock & Moriarty WowPot slot paid a prize of €440,481.82 and to date. Has awarded total jackpots of €3.5m.

Wowpot progressive jackpots seed at €2 million and start to rise in value as a small percentage of all stakes is put aside until a player scoops the prize.

John Coleman, CEO at Microgaming, comments: “Remarkable to see a second hit on WowPot just days after the first! Sherlock & Moriarty is a beautifully crafted game by Just For The Win, and even though it launched network-wide less than a month ago, it has already awarded more than 58,000 wins across all jackpot tiers. My congratulations go to Napoleon and their player on this brilliant win.”